Calling in a deer is one of the most exciting things that you can do as a hunter; it means you are perfectly positioned and communicating directly with whitetail. The weeks leading up to and shortly after early November are a hunter’s favorite time of year, when does are coming into heat and bucks are up and moving, searching for their mate. And with increased buck movement comes more opportunities for you to bag your next trophy.

So how do you draw bucks into shooting range during this period of increased movement? It doesn’t matter if it’s pre-rut, the middle of the rut, or if the rut is cooling off, here are the best tactics to call in shooter bucks.

When fawns are distressed or simply want comfort from their mother, they make a high-pitched bleating noise. This call causes a doe’s maternal instincts to kick in and causes them to investigate the noise, even if they don’t have fawns of their own.

Can calls are used to imitate a fawn or does’ bleating noise depending on how high or low pitched you make the sound and how many holes you cover. This call is best used just before and at the beginning of the rut. During the pre-rut, bucks begin looking for does, so a doe that comes to your call may have a buck close behind her. Bucks may also hear your call and come in to investigate themselves. Once the rut is in full swing, fawns are stable, and does disregard their maternal instincts.

If you are hunting during the early season, or the rut, letting out a few can calls even when you don’t spot a deer, isn’t a bad idea. Deer have exceptional hearing. You may have a big doe just beyond your visibility. Make sure not to overcall either, as this is not natural or believable behavior.

Whitetail bucks actively grunt all throughout the rut to assert their dominance over younger bucks as well as attract nearby does. That’s why if you are hunting the rut, you need a grunt tube. This call imitates the grunt bucks make, causing mature bucks to head your way to investigate or challenge what they think is a smaller buck encroaching on their territory. Typically, the bigger the buck, the lower the grunt, so when using a grunt tube, your call’s pitch should imitate a younger buck. Grunting too deeply makes it sound like you’re a massive male and will intimidate and push away smaller bucks that feel they can’t compete.

“Once most does are receptive and the rut (breeding) is in full swing, I will grunt at any buck I see cruising UNLESS they appear to be coming within range. I’ve seen buck’s respond from long distances.  I blind call about every 15 to 30 minutes to pull in those bucks that might be in the vicinity of the sound but outside my range of vision.” – Grant Woods, ‘When to Call Throughout the Season’

Rattling is used to mimic the sound of two bucks fighting and is a useful tactic to use all during the rut. This attracts other bucks because they want to see what the fuss is all about and what other males are in their territory. And if you’ve never heard two bucks fighting, check out YouTube to get an idea of how aggressive you should be with your rattling.

If you have some old antlers laying around, that is as real as it gets. Use antlers that are reflective of the deer in your area; you don’t want to scare away a good buck by making it sound like two monster bucks are fighting nearby. Sometimes carrying full size antlers around can be bulky and inconvenient, so another option is to purchase a rattle bag, which also mimics the noise of antlers but is far easier to haul around.

While calling is an affective way to lure mature bucks towards you, it will all be for nothing if you get busted by the wind as the buck is approaching your location. Use HuntWise to check wind direction and Scent Drift before you start calling. Always be mindful of where you’re set up and what direction a buck will likely approach you, as it could be the difference between filling your freezer or going home empty handed.

While there are many techniques, tactics, and opinions on how to call in big bucks, these are our tried and true favorites. Regardless of the type of call you have or when you use it, your goal is always to sound as authentic as possible. So use these tips to blend in and stealthily lure your next trophy to you.

Technology is often to blame for keeping people isolated and cooped up indoors. At Sportsman Tracker, we aim to provide digital tools that get our users off the couch and into the great outdoors. As the digital backbone to the hunting and fishing industry, Sportsman Tracker is dedicated to creating great hunting experiences for sportsmen across the country. 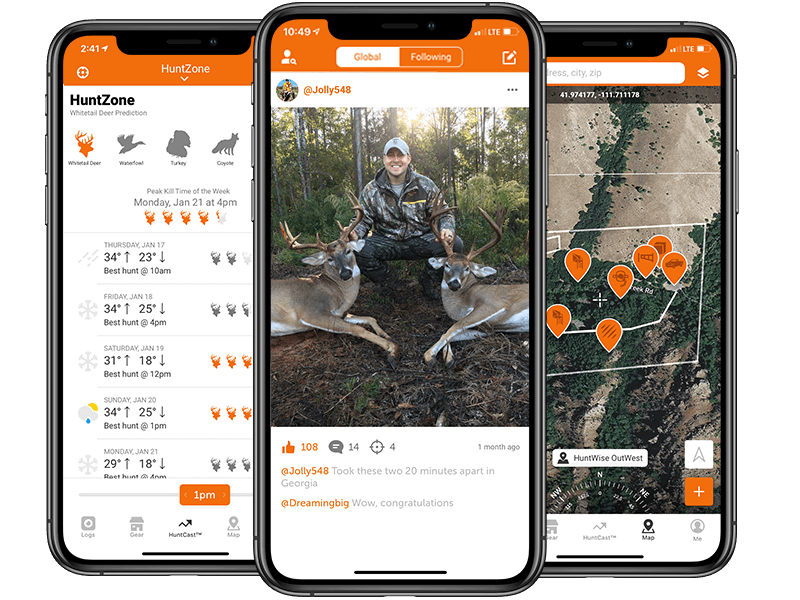